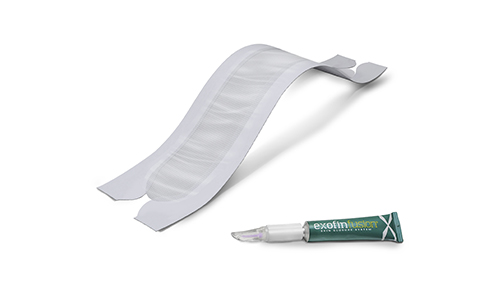 Exofin fusion combines a self-adhering flexible mesh strip and a fast-curing 2-octyl cyanoacrylate topical adhesive to close and seal incisions while forming an immediate microbial barrier to protect against infections. Chemence Medical made strategic updates to the product by reshaping the mesh strip and relocating the initiator after observing the common complaints found in the FDA MAUDE database.

“We consulted with healthcare professionals across many different disciplines and found that the current wound closure devices all presented similar challenges, which were an increase in cellulitis as well as blistering of the skin, or skin shear,” said Jeff Roberson, President of Chemence Medical. “We took their comments back to our scientists, engineers, and product design team and began the work of eliminating those parts that may be causing this elevation of adverse events. We feel that our newly designed product has successfully eliminated the factors that could lead to poor patient outcomes while still delivering on the great attributes that a product like this can offer.”

The product line now features mesh that has curved ends so that when force is applied to the area where the mesh has been applied, it is more evenly distributed along the mesh itself instead of in the four of the rectangular designed products. The new shape has reduced the area for potential damage due to stress by 67%.

In addition to this design change, the chemical used to aid in the cure of the adhesive was removed from the mesh and relocated within the adhesive design. This change reduces the amount of exposure the patient has to that initiator chemical by over 60%.

The company has been made aware of almost no negative patient outcomes since these changes were made to the device.

Exofin fusion is offered in three sizes: the traditional sizes of 22cm and 60cm, and now a new 30cm size, which was added in order to cover most orthopedic incisions where a 22cm is not long enough. The new size eliminates the need to open two products, a benefit that saves money for both the healthcare provider and the patient.